Biologic drugs are quickly reshaping the pharmaceutical landscape as they dominate the drug market in annual sales revenue.  Abbvie’s Humira® (adalimumab) rocketed to the best-selling drug in the world with sales generating over $16 billion USD in 2016. The top biologic drugs are all driving revenues well beyond the $1 billion sales revenue demarcation that traditionally defines a blockbuster drug.  The staggering revenue generated by the latest generation of drugs has launched major efforts by companies over the last 10 years to quickly develop biosimilar versions of these drugs to carve out their own market share.

Recent market analysis indicates that there could be a tidal shift in the biologic drug market in the years to come. Evaluate Pharma’s 2017 World Preview reports that the entry of biosimilars into the global markets is expected to erode the total sales of biologic drugs by as much as 54% through 2022.  According to the report, biologic sales may stand to lose up to $194 billion USD as patents on the top biologic drugs set to expire.  In particular, patents covering infliximab, bevacizumab, trastuzumab, and rituximab will be expiring in the next couple of years.  The table below lists the top grossing biologic drugs in 2016 compared to the projected sales in 2022.  Despite the market changes, biologics are expected to contribute 52% of the top 100 product sales by 2022.

Netscribes – a global marketing intelligence and content management firm – recently released its own analysis of the world-wide biosimilar market.  Netscribes reports the biosimilar global market value is expected to reach $36 billion USD by the year 2022. 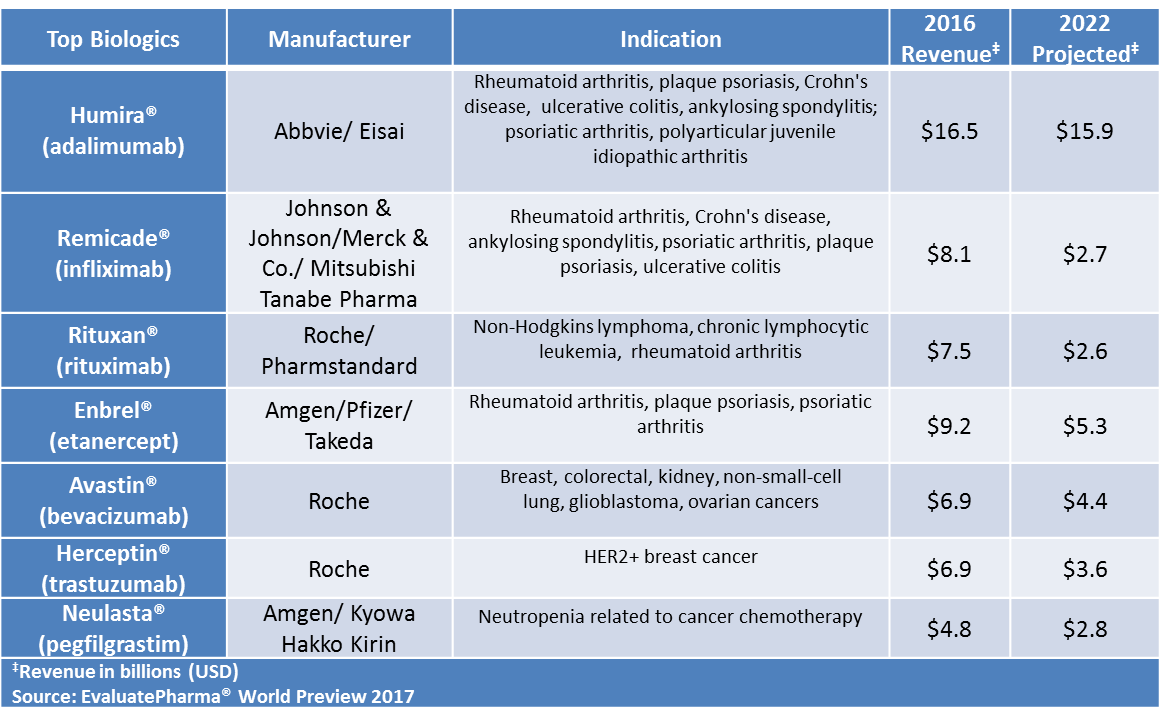 The biggest impact on global biologic sales will likely come from the European block.  Europe has already vastly outpaced the rest of the world in biosimilar approvals.  In fact, the EU has given marketing authorization to 28 biosimilar drugs, compared to a mere five biosimilar drugs receiving approval in the U.S.  Given the substantial lead in the biosimilar field, Europe stands to dominate the global biosimilar landscape for years to come.

The analysis by the European Commission provides a useful glimpse into the changes that are soon expected to take shape more broadly across the globe.  Biosimilars will significantly impact the sales revenue across many therapeutic areas, even if the initial market penetration is weak.  However, the overall impact on the major pharmaceutical companies manufacturing the originator products is less clear as the report indicates certain variables could potentially mitigate lost revenue.  In particular, price reduction of the originator product appears to slow market penetration of the biosimilar.  In addition, entry of the biosimilar appears to increase product consumption overall.

Biosimilar drugs will undoubtedly reshape the global pharmaceutical market as they grab market share in the years to come.  The speed with which this happens will depend on how the biosimilar manufacturers choose to use their capital to position themselves in the global market.  Given the enormous revenue generated by biologic drugs, even shaving a few years off market exclusivity by attacking pharmaceutical patents could render a major win for the generic company, particularly as the report from the European Commission shows that early entry into the market has major advantages.